In 1986, Yolanda Martinez worked for the City of Seattle in the Neighborhood Services office (pictured here) of Lake City (called at that time, ‘Little City Hall’). Many citizens she engaged day to day could not access holiday resources in
North Seattle. It isn’t that folks could not qualify for support, it was because there wasn’t any program to help. Most resources were allocated for people in need in the south end of town.

The Seattle Times ran the attached story in 1991. At that time, her quote, ‘always been a myth that poverty in Seattle stops at the Ship Canal’, was very real. From this reality came the Lake City Christmas Project. When Maple Leaf Lutheran Church in Meadowbrook accepted the reigns of the community project in 2003, the Children’s Home Society had temporarily hosted the project to support the Neighborhood Center’s office in what would later become the North Helpline / Lake City Food Bank. For a brief time the Neighborhood Services office would share space with the newly birthed Food Bank.

Fast forward to today; the City of Seattle’s Neighborhood office is now located in the same building as the Lake City Library. The North Helpline/ Lake City Food Bank is located in Jim McDermott Building south of and across from the Lake City’s Fred Meyer store. The Lake City Holiday Project is now a part of the nonprofit, Meadowbrook Community CARE project list (mc-care.org). MC2 was started by church members at Maple Leaf Lutheran Church (in Meadowbrook) in 2007.

An interesting historical aside, the article mentions some of their most ardent and supportive community folks were from local strip clubs that resided in Lake City at the time. Which goes to show you, one cannot always tell by appearance, clothed or unclothed, who cares. 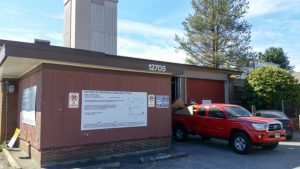 Comments or questions are welcome.