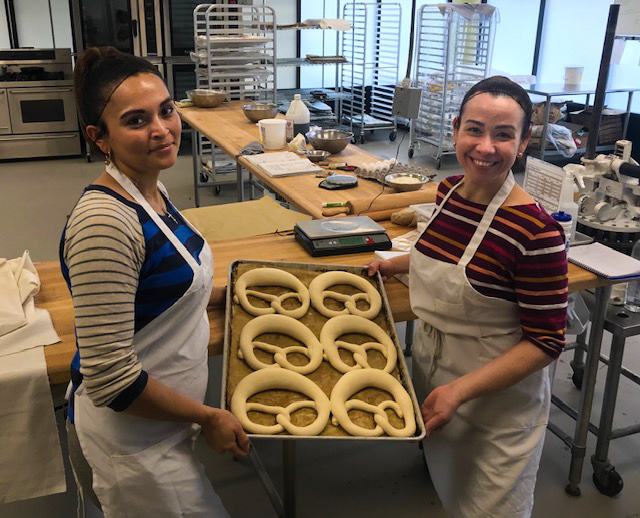 As the many colorful murals of Seattle’s Lake City District appear in blank and barren spaces, another claim to fame for folks by the lake is now frequently, ‘on the menu’. Kaffeeklatsch Bakery first appeared on the Lake City scene in 2011. Annette Heide-Jessen, owner of this tiny center of the community, advocates and organizes action to make Lake City whole again.

Around town one can take a menu from, say, Northgate’s Watershed Pub and Kitchen (or neighbor, Elliott Bay Restaurant) and taste the offerings of Lake City’s own. For some time, pretzels and other culinary delights (rye crostini is another) have been made at the yummy coffee business. Now, this important business leader has a separate shop making bakery goodness.

A recent tour of her ‘Breadware’ in Lake City shows the dedication and long term health of a business dedicated creating jobs and deliciousness. As big supporter of MC2’s Lake City Holiday Project and Olympic Hills Elementary ELL After School Program, pop in and give ‘thanks’ for the work of Annette and the community. They are committed to a healthy, vibrant and welcoming place to live and work. Almost Valentine’s Day, so, have a Kaffeeklatsch pretzel heart and remember the ‘loving’ gift of Kaffeeklatsch.