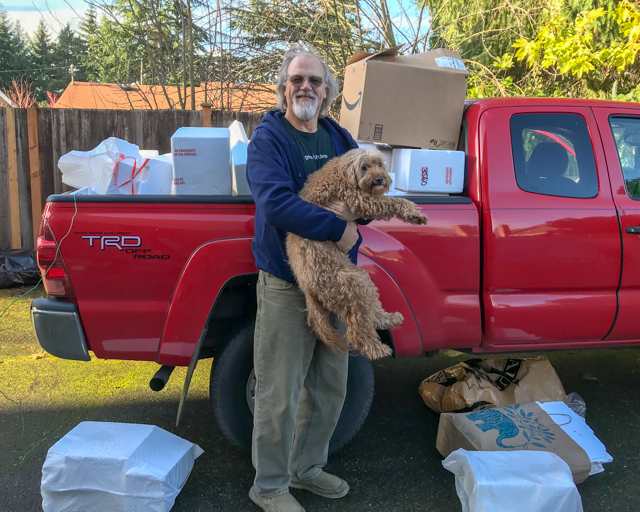 With ‘kudos’ to Nextdoor and Seattle Lighting, Maple Leaf Lutheran Church in Meadowbrook Green Team held a holiday styrofoam drive. Dedicating the lobby for drop off probably would not be a first choice in the future. Office Dog Dewey couldn’t figure out what was taking up his lounge space.

Having a staff shortage also played into the first time event and not in a helpful way. Prior to event, our administrator left her recently hired position. So, onward we go. learning what worked, what challenges were encountered to better recycle this bad stuff in the future.

A dedicated Styrofoam Recycling Company in Kent WA was one of the places considered but driving a load of this stuff, driving down the I-5, just didn’t seem to be a good idea. As it was already a windy day, just loading up was a bit of a hilariously frustrating exercise. Again, Dog Dewey was a bit confused and curious.

The Seattle Lighting Company’s warehouse in the Sodo district was the destination and an interesting one, at that. Since they’re in the ‘lighting’ business, bit of a surprise to see the final dark and dank warehouse destination. Appreciate their commitment though, THANK YOU to Seattle Lighting and to the best intentions of the many citizens of NE Seattle!