Meadowbrook Community Care has been advocating for various safe-street improvements to the 32nd Ave NE greenway and throughout NE Seattle, starting with a dedicated crosswalk at NE 95th and 32nd Ave NE. In June 2016, we gauged interest in a safe street project that moved residents between Meadowbrook and Wedgwood. With a ‘stores’ to ‘parks’ focus, the hope is to build projects around a street that already acts and quacks like a greenway.

The support for a greenway began with a visit to the local community councils of Meadowbrook and Wedgwood. In 2016 the representatives acknowledged and supported the idea and what it meant for the community.  With a residential street that was level, calm and strategic in its location, it is identified by Seattle Greenways as ideal for ‘feet’ and ‘pedal’ users. A key element to the idea is a dedicated crosswalk at NE 95th and 32nd Ave NE. Traveling north-south in these communities can be challenging when using 35th Ave NE.

With schools, parks and consumers looking for safe streets, the hope is that being intentional and supportive around non-car traffic, citizens can rely on this resource as they switch from their cars to other healthy and green alternatives.

Participate: Share the safe streets message. Do you live along or near the 32nd NE street greenway? Interested in having a block party? How about a play streets day for kids? With no sidewalks, the community can help keep the streets safe. Get more information. 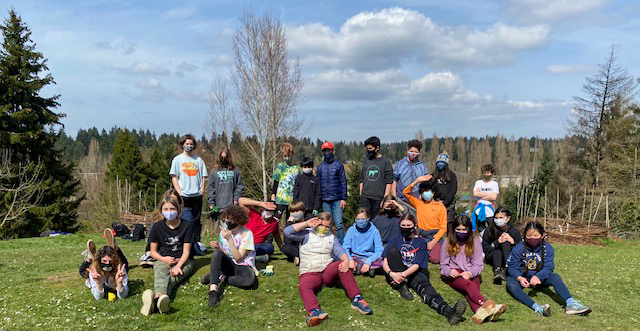 Terry Vogel 04/15/2021
MCGO and MC2 work together to maintain, improve and plant fruiting trees at the Orchards and Community Gardens. This food security effort ends at the…
Read More
all posts